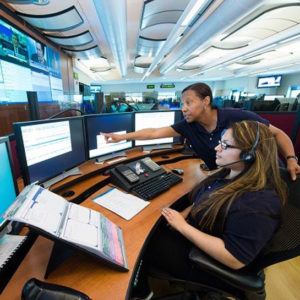 In the field of public safety, interoperability has several specific meanings that apply to the tools used in our profession.  For instance, fire apparatus hose fittings are commonly standardized so that departments from different jurisdictions can provide mutual aid effectively.  Merriam Webster defines interoperability as the “ability of a system to work with or use the parts or equipment of another system.”  This article will focus primarily on communication tools such as land mobile radio (LMR) and computer aided dispatch (CAD) in addition to illustrating the overall need for an interoperability-based approach to any communications technologies intended for use by public safety.

Emergency incidents can occur anywhere, and do not respect jurisdictional borders.  When this happens, responders from more than one agency have to respond and work together.  Agencies set themselves up for failure and put lives at risk when interoperability is not carefully considered and built into the purchase and implementation of equipment and programs they utilize to communicate, both with the public and with other agencies.

Providing a few real-world examples of problems that public safety faces today may help illustrate how vitally important interoperability is.  The following examples are drawn from a career that has spanned over thirty years as a first responder and a director of two Public Safety Answering Points (PSAPs).

When I was a law enforcement officer, our jurisdiction, like many across the country, was bordered on three sides by another jurisdiction that had a disparate LMR system.  Some LMR systems in the United States are typically referred to as proprietary, meaning that they do not talk to systems of a different brand or frequency range.  Our jurisdiction had such a system, as did those that bordered and responded with us.  During an incident that required multi-jurisdictional response, our only solution was to partner with another patrol vehicle from the neighboring agency and manually relay the necessary information over the air to the disparate system.  This occurred frequently and had the undesirable side effects of taking two scarce patrol units away from the primary task of responding to the incident.  In addition, because communications were relayed, it was easy to miss important information.  This costs time and efficiency and it can put both the responders and the public at risk.

Serving as a communications director, my centers faced a similar challenge to the previous example.  What made it different, was that the officers in the jurisdictions that commonly worked together across a jurisdictional border personally purchased commercial cellphones with a push to talk feature.  While this allowed them to communicate with each other, their solution had many shortcomings: they did not connect to our recording system in the PSAP; they were not monitored so if the responders were using personal phones instead of department radios to communicate emergency information, the communications center would not know about the emergency traffic; and the handsets were not mission critical.  While this solution was problematic at best, the fact that responders tolerated these shortcomings illustrates the level of frustration public safety experiences with the inability to seamlessly connect.

My final case in point is again derived from my time as a communications director.  Because public safety responder jurisdictions sometime overlap PSAP boundaries it became necessary to implement a CAD to CAD solution to dispatch fire department incidents.  When the agencies developed the plan everything seemed simple because both PSAPs purchased CAD from the same vendor, and had the same version running on the same type of equipment.  Imagine our surprise when the vendor required both PSAPs to purchase very expensive interfaces for our CADs to exchange information.  Of course, there were also expensive maintenance contracts for the interfaces every year after we made the purchases.  Ultimately the only options were to pay the price, or spend literally millions of dollars to change vendors.

These examples are not unique.  Every day public safety officials and responders deal with similar issues, and it strains the operations and puts lives in danger.  Less important, but significant, are the burdensome costs associated with connecting disparate systems.  When consumers are faced with an unexpected or undesirable cost, they turn to a competitor.  Public safety agencies don’t have that luxury.  They are typically locked into contracts that package multiple services with proprietary solutions, making a change to a competitor a major expense.

These technology challenges seemed difficult to overcome years ago, but today it is common to see inexpensive commercially available devices that can transfer multimedia seamlessly to disparate devices on different platforms.  If this technology and capability is in the hands of the consumer today, why can’t public safety benefit in a similar way?

The vision for seamless interoperability that I’m trying to explain is described in the APCO P43 report on “Broadband Implications for the PSAP” in the following way:

Fully interoperable voice and data communications allow the units who arrive first on scene to provide up to date, real-time information to additional units responding to the scene regardless of which agency they are from. PSAPs, though they have different CAD and radio systems, can communicate and receive common updates via interoperable, standardized CAD interfaces.

Pushback to this vision demonstrates how entrenched we are in the sometimes regressive traditional thinking.  Approaches that worked in the past will no longer work today.  Engaging the public safety community to help define the problem and providing innovative solutions is essential.  Public safety was not somehow put in this precarious position overnight.  These concerns are not new, and have been real-life concerns for several decades.  Entire careers have started and ended with the attitude that this problem is too large to ever overcome.

While FirstNet offers promise on the responder communications front, and solutions are being deployed to address much of what has been problematic, challenges still remain for the full emergency communications ecosystem, including LMR and 9-1-1 systems.  APCO, with the help of the US Department of Homeland Security and industry partners, will continue to work to fix interoperability problems for LMR.  However, it is critical that we take the same approach to Next Generation 9-1-1 and ensure that it includes requirements for interoperability at all levels.[1]  From the ability of the public to send multimedia communications to PSAPs, to the ability of PSAPs to process and share that data with each other – regardless of vendor, equipment, and jurisdiction – we cannot afford to ignore the importance of interoperability in this realm.  Working together, the public safety community, technology designers, manufacturers, network and service providers, and fellow standards development organizations can assure that both citizens and responders are made safer by addressing this important concern.   As our industry moves toward Next Generation 9-1-1 and IP based systems and services, now is the time to learn from the past and move forward in a positive direction.  Anything less is a disservice to our profession and the public we serve.

[1] APCO President Martha Carter recently authored a member message with an update on efforts to achieve fully interoperable NG9-1-1, including questions to consider asking of NG9-1-1 equipment and service providers.

Steve began work with APCO International in 2013, and served as the Director of Communications Center and 9-1-1 Services until 2020.  Steve has worked in public safety for 34 years as a Telecommunicator and Police Officer in Dearborn, MI, Emergency Management Director, and 9-1-1 Director in Huron and Eaton County MI.  Steve is a University of Michigan graduate, a Marine Corps veteran having served as a Military Police Sergeant, and Presidential Guard at the White House.  Steve is a former President of the Michigan Communication Directors Association.

A “Tabletop Exercise,” often shortened as “TTX,” is a discussion-based exercise frequently used by emergency planners. Led by a facilitator using a planned scenario, TTX participants describe the actions they would take, and the processes and procedures they would follow. The facilitator notes the players’ contributions and ensures that exercise objectives are met. Following the exercise, the facilitator typically develops an after-action report and conducts a debrief discussion during which players and observers have an opportunity to share their thoughts, observations, and recommendations from the exercise without assigning fault or blame.

Many of the attributes of a TTX are the same we seek to promote in the discussion generated from our blog posts. The goal is to capitalize on the shared experiences and expertise of all the participants to identify best practices, as well as areas for improvement, and thus achieve as successful a response to an emergency as possible.