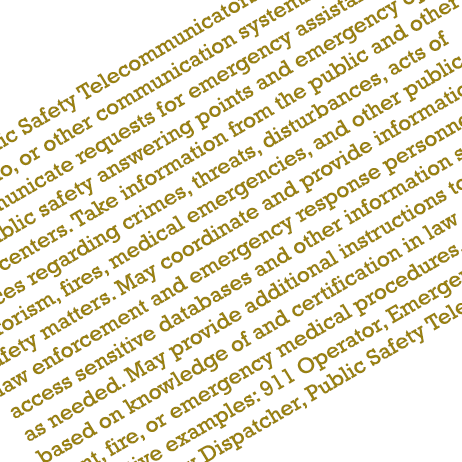 The Standard Occupational Classification (SOC) is one of several classification systems established by the federal government to ensure coordination of federal statistical activities. In its current version, 9-1-1 professionals are identified as “Police, Fire, and Ambulance Dispatchers” and classified as “Office and Administrative Support Occupations.”

The Office of Management and Budget (OMB) coordinates the SOC. In 2014, OMB initiated a revision for the 2018 SOC. The SOC Policy Committee (SOCPC) was established, consisting of representatives from nine federal agencies, to review public comments and make recommendations to OMB.

The occupations in the SOC are classified at four levels: major group, minor group, broad occupation, and detailed occupation. What APCO would describe as “Public Safety Telecommunicators” are currently categorized as “Police, Fire, and Ambulance Dispatchers”:

For more information about the SOC, including a timeline of the revision process, click here.

(The SOC does not have a direct legal relationship to the Fair Labor Standards Act (FLSA). Reclassification in the SOC would not, by itself, open the door for different treatment under FLSA.)

1.   Use the title, “Public Safety Telecommunicators” (instead of “dispatchers”.)

2.   Classify them as a “protective” occupation, in the same category as police officers, firefighters, lifeguards, crossing guards, and TSA screeners (instead of with clerks and secretaries) because Public Safety Telecommunicators:

The revised detailed occupation name and categorization of the SOC would look like this:

This work comes with an extreme emotional and physical impact that is compounded by long hours and the around-the-clock nature of the job. Indeed, research has suggested that Public Safety Telecommunicators are exposed to trauma that may lead to the development of posttraumatic stress disorder. Recognizing the risks associated with exposure to traumatic events, some agencies provide Critical Incident Stress Debriefing (CISD) teams to lessen the psychological impact and accelerate recovery for Public Safety Telecommunicators and first responders, alike.

Congressional NextGen 9-1-1 Caucus Co-Chairs’ Letter to OMB
On June 23, the Congressional NextGen 9-1-1 Caucus Co-Chairs – Senator Amy Klobuchar (D-MN), Senator Richard Burr (R-NC), Representative Anna Eshoo (D-CA), and Representative John Shimkus (R-IL) – sent a bipartisan letter to the Office of Management and Budget (OMB) urging OMB to revise the Standard Occupational Classification (SOC) to accurately represent the complex and life-saving nature of the work performed by 9-1-1 professionals. This was a welcome development that will aid APCO’s ongoing efforts to 1) use the title “Public Safety Telecommunicators” (instead of “dispatchers”) and 2) classify them as a “protective” occupation, in the same category as police officers and firefighters (instead of in the administrative/clerical category).
OMB’s Interim Decision
On July 22, OMB published a 2nd Federal Register Notice requesting comments on a review committee’s recommendations for SOC revision. Unfortunately, this Notice did not include APCO’s recommendations. The reason given on the SOC website for rejecting the Co-Chairs’ and APCO’s recommendations is that

“The work performed is that of a dispatcher, not a first responder. Most dispatchers are precluded from administering actual care, talking someone through procedures, or providing advice. Moving the occupation to the Protective Services major group is not appropriate and separating them from the other dispatchers would be confusing. Also, dispatchers are often located in a separate area from first responders and have a different supervisory chain.”

APCO strongly disagreed with this reasoning and immediately took action to leverage the full strength of its membership and every available resource to ensure Public Safety Telecommunicators receive the recognition they deserve, including:

After conducting additional research and incorporating the detailed information about the protective nature of the work performed by Public Safety Telecommunicators provided by the membership, APCO submitted comments in response to OMB’s second solicitation of public comments on the SOC.

APCO’s Latest Comments
APCO filed formal comments on September 20 that provided extensive explanation and examples describing the “protective” nature of the work performed by 9-1-1 professionals, building on information submitted by APCO members. APCO also challenged OMB’s pattern of applying ad hoc and arbitrary criteria to Public Safety Telecommunicators, noting that many of the factors used to justify maintaining the status quo are irrelevant to the SOC’s classification principles, and would in fact disqualify many existing and proposed occupations from the Protective Service category.

Here are a few excerpts from APCO’s latest comments:

“Public Safety Telecommunicators provide lifesaving advice, information gathering and analysis that protects the public and first responders. The work they perform goes beyond merely receiving requests and dispatching resources. It’s life or death, and the current representation in the SOC does a disservice to them, as well as to the statistical purposes for which the SOC is designed.”

“[The federal committee] was wrong when it concluded that ‘Most dispatchers are precluded from administering actual care, ‘talking’ someone through procedures, or providing advice.’”

“[The federal committee’s reasoning] is inconsistent with the SOC classification principles and current makeup of the Protective Service Occupations [category] … and [they] should only be considering the nature of the work performed by Public Safety Telecommunicators and whether their lifesaving work is a protective service.”

“Reclassifying Public Safety Telecommunicators as Protective Service Occupations would correct an inappropriate representation in the SOC, recognize these professionals for the lifesaving work they perform and better align the SOC with related classification systems.”

Additional Data Sent to OMB
In December 2016, there were two significant contributions of additional support for reclassifying Public Safety Telecommunicators.

Second, APCO has remained in touch with the federal officials involved throughout the revision process.  During an in-person meeting to discuss the comments submitted in September 2016, OMB requested additional information regarding 1) how the roles of 9-1-1 professionals have evolved; 2) whether “Public Safety Telecommunicator” is representative and commonly-used as a title; and 3) how common it is for Public Safety Telecommunicators to operate in the field.

On October 18, 2017, the American Heart Association sent a letter of support to OMB, pointing out how PSTs are a critical link in the cardiac arrest chain of survival.

Final Decision for 2018 SOC
On November 28, 2017, OMB published a final decision in the Federal Register, changing the detailed occupation name to “Public Safety Telecommunicators” but REJECTING the suggestion to reclassify them as Protective Service Occupations. Read a summary of the explanation provided with rebuttals from APCO.
APCO Member Message on Increasing Recognition of 9-1-1 Professionals by Aligning Job Descriptions With the Protective Nature of the Work
As part of APCO’s ongoing effort to increase recognition and respect for 9-1-1 professionals, we are offering suggestions for job descriptions that will align with the protective, lifesaving nature of the work. These suggestions may look familiar, as they mirror the recommendations APCO made for revising the federal government’s catalogue of occupations and the published findings of APCO’s Project 43 report on Broadband Implications for the PSAP. We are seeing major changes for public safety communications. To improve recruitment, retention, and recognition for 9-1-1 professionals, job descriptions may require updating to highlight the challenging, life-or-death nature of the work performed, and potentially to eliminate or avoid over-emphasizing any clerical tasks that were more relevant to the early days of 9-1-1. Read the full message.

In July 2019, the provisions of the 9-1-1 SAVES Act were included among numerous amendments to the National Defense Authorization Act (NDAA), which had passed the House of Representatives. While a welcome development, the process forward for the NDAA was complex and required reconciliation of the differing House and Senate versions of the bill. In December, a report was released indicating that the final version of the NDAA would not include the reclassification provisions.

In April 2021, the 9‑1‑1 SAVES Act was reintroduced in the House of Representatives and Senate. APCO launched a grassroots advocacy campaign asking members to send letters seeking support for the bill.