This Friday, the FCC will vote on new rules that are supposed to ensure that first responders can locate someone who calls 9-1-1 from inside a multi-story building.  Unfortunately, the rules will not only fail to produce meaningful improvements, the FCC will let wireless carriers continue to avoid pursuing much better options for 9-1-1 location accuracy.

Imagine a 9-1-1 professional receiving a call from someone having a heart attack or stroke in a high-rise apartment building or office.  Seconds matter.  The caller passes out before reporting his location, and it’s the 9-1-1 dispatcher’s job to make sure paramedics arrive quickly enough to save his life.  The FCC requires the wireless carrier to provide the caller’s horizontal location (usually “x/y” GPS coordinates), which the 9-1-1 center uses to plot a street address for the building.  The FCC has similar rules that, starting in 2021, would require the wireless carrier to provide vertical (“z-axis”) information about the caller’s location.  The goal was for 9-1-1 to know the floor number if not the actual apartment number of the caller.  But that’s not going to happen anymore if the FCC adopts these new rules.  Instead, the FCC will require the wireless carrier to deliver an estimated height in terms of a technical measurement of altitude called “height above ellipsoid” (HAE).  If you’re already thinking this doesn’t make sense, you’re right.  Whether and how 9-1-1 could use this information – and what information carriers should provide instead – to save the caller’s life is a subject of fierce debate.

Dozens of 9-1-1 center directors have weighed in directly with the FCC, asking that wireless carriers be required to provide better location information for 9-1-1 than what the FCC has proposed.  APCO, the world’s largest association of public safety communications professionals (who work in or manage 9-1-1 centers), has been voicing a variety of concerns on behalf of 9-1-1 experts across the country.

“Height Above Ellipsoid” (HAE) is a raw technical format for altitude.  While trying to save a life, the 9-1-1 dispatcher would receive something like “101 Main Street; 76 meters, +/- 3 meters HAE” instead of “101 Main Street, 7th floor” or “101 Main Street, Apt. 702.”  When someone’s life is at stake, there is no question about which kind of information would be more effective.  The largest 9-1-1 centers in the country have said that even they don’t have the resources to turn “HAE” data into actionable information because it would require significant time and money to create and maintain 3D maps for the millions of buildings across the country, and then specialized software to translate the HAE readings onto the maps.

The FCC assumes that responders in the field – police, fire, EMS – would have devices and apps that provide HAE measurements that could be matched to the caller’s.  This, too, 9-1-1 experts have said is unacceptable.  It adds extra time to the response while responders go up and down the stairs or elevator attempting to match their HAE measurements to the HAE reported to 9-1-1.  Plus, the FCC’s rules will only require accuracy of +/- 3 meters (equivalent to 10 feet) for the 9-1-1 caller’s HAE measurement (and only for 80% of calls), and the rules don’t take into account the additional error that could arise from responders’ devices producing their own HAE measurements.  Google submitted a letter to the FCC that has a picture that explains this problem well: 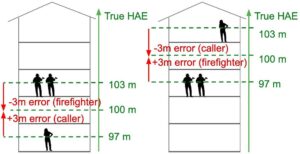 And in some emergencies – ex: police have their guns drawn or firefighters are in a burning building – it is hard to imagine how a responder would be able to safely look at a device while trying to navigate to the caller.

APCO has repeatedly cautioned the FCC that the new rules might not produce the expected benefits.  Carriers will be able to comply with the rules through technicalities, even though many handsets will not provide vertical location information and major handset manufacturers might refuse to support the specialized location technologies that are necessary to meet the FCC’s accuracy requirements.  The FCC is mostly ignoring these concerns but has unspecific plans to take further action sometime after the new rules are in place.

Instead of focusing on getting 9-1-1 the best possible location information, the FCC is ignoring the advice of 9-1-1 experts, taking an unnecessarily narrow approach, and giving the wireless carriers a pass.  The FCC’s rules should be moving us closer to the best possible location information for 9-1-1, which would be the street address of the building plus the apartment or office number (or whatever else is needed to locate the caller).  If it’s too hard to identify the apartment number, the carriers should at least provide the floor number as a starting point.  That’s what APCO and 9-1-1 center directors are asking for.  But if the FCC’s rules allow carriers to take the easy way out and send a raw altitude (HAE) estimate, we’ll probably never get that better location information.

But the FCC is blindly pressing forward.  They’ve lined up support, playing the political “beltway game,” while ignoring concerns that its order will fail public safety.

Lobbying by specialized vendors.  Unsurprisingly, some of the loudest supporters of the FCC’s proposal – the vendors who provide HAE solutions – will benefit from it financially.  Only one company, maybe two, demonstrated the ability to meet the FCC’s proposed vertical accuracy requirements.  One of those companies, NextNav, has been marketing a solution that is aimed at solving a different problem – tracking the locations of responding police, fire, and EMS officials.  There’s obviously a great interest in being able to track responders, for example, to help locate incapacitated firefighters.  NextNav staged a demo for those in the fire service years ago, under ideal conditions with mocked up devices and software the first responders might not ever have.  But there are many flaws with NextNav’s technology – perhaps most notably that Apple refused to even permit testing of it on iPhones and has expressed concern over privacy and battery drain associated with the technology.

Forgetting to focus on the 9-1-1 location problem.  No one disagrees that 9-1-1 should receive the most accurate and actionable location information possible.  The disconnect seems to be that APCO is pressing the FCC to require more of the carriers and believes that the FCC’s 9-1-1 rules should focus on the best outcome for 9-1-1 calls, rather than try to provide a responder tracking solution.  Besides, the government has separate efforts underway to improve responder location tracking, including FirstNet and a recently-announced $8M R&D program.  The FCC has no business shirking its responsibility for solving a 9-1-1 problem and departing from years of its own precedent to pivot to a completely different purpose.

Distractions of wishful thinking.  There are a few “true believers” in the FCC’s proposal who think that the best possible information for locating a 9-1-1 caller is an x/y/z coordinate, meaning a 3D point in space.  We’ll just have to agree to disagree.  Part of the disconnect is that even the largest 9-1-1 centers in the country have said they don’t have the resources to create 3D maps of every building and specialized software to visualize the caller’s location.  (Many 9-1-1 centers are struggling just to keep up their staffing levels.)  9-1-1 centers shouldn’t have to shoulder this responsibility when the FCC’s rules are all about imposing requirements on the carriers and there are more efficient options.  The other part of the disconnect seems to be a concern that if 9-1-1 centers could receive estimated floor levels that are sometimes incorrect, responders might be worse off than if they were relying on coordinate-based information.  APCO has pointed out that, regardless of whether the information provided is a floor level or x/y/z coordinate, 9-1-1 centers will need supplemental information that helps them understand how accurate that estimated location information is and what to do if it’s wrong.

Narrowmindedness regarding technologies that exist today.  Some have also argued that it’s impossible to estimate the floor level of a 9-1-1 caller.  We know it’s possible.  (Google is even on the record urging the FCC to modify the proposed rules to allow the provision of a floor label rather than mandate sole reliance on measurements of HAE.)  The disconnect seems to be that there’s a difference between being able to convert a z-axis elevation to a floor label – which requires resources that do not exist – and being able to provide z-axis information that includes a floor label – which is possible today.  (In a separate letter, Google confirmed that its approach to deriving a floor label would not require converting an estimated altitude in terms of HAE.)  There are several ways carriers could deliver a floor level to 9-1-1.  They could partner with a company like Google, or they could leverage their own in-home products (like Internet access, 5G products) and a host of other viable methods.

The silence of the wireless carriers.  The wireless carriers have been suspiciously quiet (except for a subtle refrain that complying with the FCC’s rules might not be possible).  Why?  Because they are being let off the hook.  Maybe they will hire the specialized vendors and pursue other options for improving 9-1-1 location accuracy, but I bet they won’t.  My guess is they’re biding their time and hoping that Google and Apple will solve the problem for them.

It’s hard to understate the problems with the FCC’s proposal, but APCO has been raising alarm bells about several compounding factors (which you would think would motivate the FCC to reconsider its approach):

APCO has asked the FCC to think long-term (beyond lining up uniforms and putting out a celebratory press release about supposed improvements for public safety), and consider that no one wants to look back a few years from now and realize that we missed a chance to solve the critical problem of locating those in desperate need of emergency assistance.  The wireless carriers promised the FCC and public safety much better and must be held accountable.  The FCC can and must do better.

A “Tabletop Exercise,” often shortened as “TTX,” is a discussion-based exercise frequently used by emergency planners. Led by a facilitator using a planned scenario, TTX participants describe the actions they would take, and the processes and procedures they would follow. The facilitator notes the players’ contributions and ensures that exercise objectives are met. Following the exercise, the facilitator typically develops an after-action report and conducts a debrief discussion during which players and observers have an opportunity to share their thoughts, observations, and recommendations from the exercise without assigning fault or blame.

Many of the attributes of a TTX are the same we seek to promote in the discussion generated from our blog posts. The goal is to capitalize on the shared experiences and expertise of all the participants to identify best practices, as well as areas for improvement, and thus achieve as successful a response to an emergency as possible.